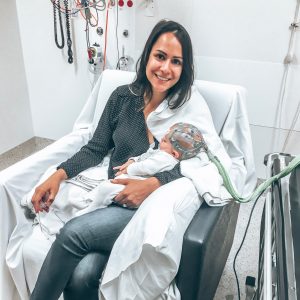 In the hospital ER with Lily undergoing an EEG

Would you be able to spot a seizure? When Lily was diagnosed we were told to expect seizures would occur if not from birth, it would happen eventually. It was a done deal. The closest I had come to epilepsy before that was knowing one or two friends at school who’d had seizures. They lived fairly ‘nuro typical’ lives but the thought of seizures happening to a baby terrified me.

As I started to research, I learnt that seizures can come in all shapes and sizes, from absent seizures (ever known someone who just ‘vagued’ out every now and then ?) to tonic-clonic seizure, the type most people think of when they imagine seizures. The type Lily had were called Infantile Spasms and they can be very difficult to spot initially often misdiagnosed as reflux or normal baby movements. Lily was about 4 months old when her seizures began although it hurts to say that I sometimes look back on her videos now and I think I can spot seizure activity much earlier (the benefit of a now practiced eye).

It started the week Will had flown overseas for a work event, and my mum had flown over from Tasmania to help me with Lily. Thank goodness. The night before the seizures started we had some bad news from my Dad who had stayed in Tasmania for work as he was on call at the local hospital. He called to tell us was flying over to Melbourne in the morning to have a suspected malignancy in his lower spine looked at immediately. It had been discovered under MRI by work colleagues that day and they were worried enough to want him over in Melbourne for further investigation. I just remember crumpling. Looking at mum, I cried ‘What else can go wrong’.

Little did I know that the next day Lily’s seizures would begin. That next day Dad arrived. Both of my parents have extensive medical experience and are incredibly cool in a crisis. Not cool and collected if preparing for Christmas Day luncheon or working out how many cars are required to get a bridal party to a wedding ceremony, but throw a major medical incident at them and you get the calmest most rational people in Australia. Mum is a retired midwife and maternal child health nurse and brilliant with babies. Dad an experienced and very senior ear nose and throat surgeon. They’ve both dealt with their share of drama and emergency in their lives. I truly believe their medical calm instilled Will and I with the confidence to feel equipped to manage most of Lily’s life at home. 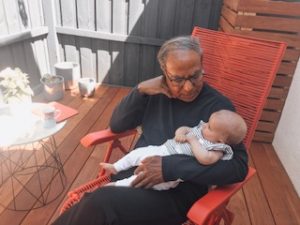 Dad with Lily the night the IS started.

That evening Dad and I sat outside on the deck calmly sipping wine, talking about his procedures to come the next day. Mum walked out, and very calmly said ‘Darling, I’ve been holding Lily and she’s started doing these arm movements and jerking’. I leaped up grabbed Lily and then – probably to my parents alarm – grabbed my phone and began videoing what she was doing. I was fairly certain these were the form of seizures known as infantile spasms. I sent the video off to her pediatrician who got in touch and told us to come in first thing in the morning. I don’t know why but it didn’t occur to us to go to the ER. I suppose, I had 3 medical opinions by then and Lily had settled down. By that stage I think I had entered my own calm. A kind of action mode calm. I knew I needed to get through this. Get treatment for Lily, get Dad sorted and I could leave falling apart until later when all of the emergencies were dealt with and when my Will was home from his work trip. Oh poor Will, always overseas working when drama occurred (he had been in the USA when I had my ruptured ectopic pregnancy the year before). I called him in the Philippines to let him know what was going on, feeling bad he would get that message so far away again.

The next morning we were up early. I managed to drive Dad to his first medical appointment and then head straight into Lily’s doctor. Dr John Mills, luckily had his consulting rooms based close by in East Melbourne. Once there he gave me a script and told us to drive to the hospital pharmacy as that was the only place we could pick up the particular medicine in a hurry. I think it was for a drug called Kepra. At that stage John hadn’t heard back from the neurologist and Kepra is used to treat seizures but not typically Infantile Spasms or on first presentation.  So there was a question mark around its effectiveness. But back into the car to drive over to the pharmacy at the Royal Children’s we went.

Once I got to the hospital to collect the script, John called me again and advised there was a change of plans. The neurologist has seen the video and diagnosed infantile spasms (no surprise to me) and we now needed to get admitted via the ER to get the right treatment and that required an EEG. I remember being gutted as I felt with all my being that life was better for Lily at home not in hospital. But of course I wanted her to get the right treatment. So into the ER we went.

At that stage my Dad had been left on his own to go through his tests at another hospital back across town as mum had to make the decision to come with me. We went to the ER for what was the first time with Lily (and turned out to actually be her only time), and fortunately we were allowed straight through to a little room. Wonderful John had called ahead and let them know we were coming, so we were not required to wait with all the other kids with minor scrapes and broken bones. I was still relatively calm but Lily’s seizures had started to ramp up by then and were lasting up to 45 minutes or an hour in length. It was absolutely heartbreaking to watch. Just helplessly watching my baby girl seizing over and over again.

The Nuro team came down and explained they needed to do an EEG to have a look at what was going on. This required all those little electrodes to be glued onto her head as you can see in the photo. They glued them on as I think they were expecting us to be in hospital for some time (if having an EEG as an outpatient they might use a kind of blu tac instead. 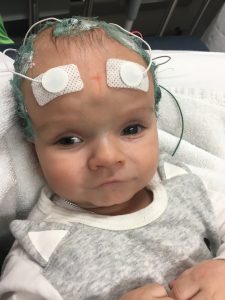 My girl with her head covered in electrodes

I remember having to breastfeed her to get her to calm down and just having my boobs out in the ER not noticing how exposed I was until somebody, some kind soul, drew the curtain around us to give us some privacy. (Mum was required to step out of the room while they recorded the EEG at that stage or I am sure she would have done this too). I also remember calling the palliative care team to let them know we were here. I loved the palliative care team. They were so warm, so comforting and so kind.  It felt good seeing them come into our little ER room to say hi. To confirm our plans if anything should take a turn for even worse. It was at that time we talked about what Lily liked and we told them how she loved music. That led to Lily’s weekly music therapy sessions with Sarah Punch our number one, favorite, musician in the world.

Lily was a star on the EEG, they recorded all the seizure activity they needed in record time (pardon the pun). And they officially confirmed Infantile Spasms and West Syndrome. Yet more diagnosis’. They explained that a steroid protocol would be the first step in getting these under control. Basically extremely high levels of steroids for a period of time and then a tapered wean off. They wanted to admit us into the Nuro ward but it was also obvious that the ward was incredibly full at the moment and they didn’t have a bed for her.

Something stirred in me as I thought of how much Lily loved her little bassinet next to our bed and I remember asking why she needed to be in hospital once the meds had been administered. Couldn’t I do it myself? I asked.

‘She needs to be observed’ They said.

‘Err, we need to do blood pressure, heart rate etc”, They said.

‘I want the best for Lily, I want her to have the best medical care and if you are saying she needs to be here this is exactly where we will stay, but if it is just to monitor her and someone checking her vitals once a day, surely there is some other way you can do that?’.

I think I even offered to drive her over a couple of times a day instead. I just knew it would be better for her at home, in her space.

Somewhere in that conversation the Nuro asked me if I had a medical background and I said ‘Nope just a law nerd’. She replied  ‘Oh you just seem to have a good grasp of this and all the names of the drugs we are talking about so I though you must have a medical back ground.’  Somehow through the worry and the nerves, I still remember thinking ‘research nerd plus medical parents = practically a doctor, am I right?’. A ridiculous giggle started to beam up inside me. But thankfully I kept this to myself. But from the parents I have met on this journey I believe that often special needs parents are doctors, nurses, therapists, advocates, investigators and paramedics all wrapped up in one.  They have to be because often there is no other choice.

After a bit of discussion among themselves, it emerged that they could offer Lily a ‘hospital in the home’ service. This meant she was technically still an inpatient but would be at home with a nurse coming to do home visits to check vitals and reporting to a doctor on the phone. How incredible. I am not usre if this service is still being offered but if you find yourself in a hospital in a similar situation I really encourage you to ask for it. I think we had more focus and attention than we might of had she stayed at home because when the nurse came each time, he or she stayed for a set period of time and could focus solely on us. No other distractions.  So just like that after a few more hours of admin, we bundled out little girl back in the car. Back across the city to our little home to find out about my poor old Dad’s day and await Will’s return flight from Manila. 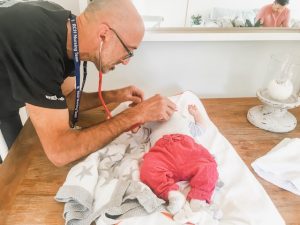 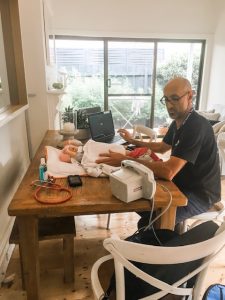 * I’m happy to report that after a successful operation dads tumor was removed, found not malignant and he is healthy and calm as ever*

* Steroids were a real bitch, awful for Lily and awful for mummy and daddy to watch.  The same sort of ‘roid rage and extreme hunger that a ‘roid junkie at the gym might experience, the upshot was our skinny girl bulked up a bit*

*Steroids worked initially and for 6 weeks after the wean off Lily was seizure free, then they came back with a vengeance and we moved onto a different medication* 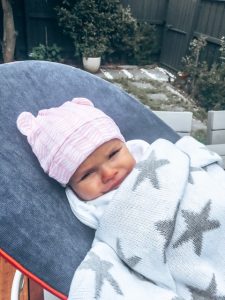 Home after being discharged from hospital and beginning the steroid wean